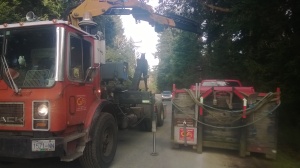 The rig in action!

Bob Bambrick’s Grandfather settled on Galiano Island in the 1920’s , having relocated his family from County Monaghan in Ireland. To begin with the Bambricks settled in Victoria, but after five or so years, sought the peaceful, rural delights of Galiano Island.

in 1935 Bambrick bought Heryets grocery Store, in Sturdies Bay which he ran for many years. When Bob’s Grandfather died, Bob’s Father, who was working as an Steam Engineer for The Canadian Pacific Railways, Coastal Ships, came back to assume management of the store.

The Bambricks continued to do well and at one point owned both the general store in Sturdies Bay, Galiano and one in Miners Bay, on Mayne Island.

Bob acquired the Galiano Motor Carrier license in 1960, and has been proudly serving the Island ever since.